Since pasture and hay are the wealth of a horse’s diet, it’s safe to say that forage management is critical to ensure a horse’s nutritional requirements are being met.  Please join us for a three-part virtual horse series, via Zoom, beginning on December 10th. All three presentations will be held from 12 pm-1 pm.  This series will discuss forage management topics relevant to horse owners but anyone interested is welcomed to attend! Please see the schedule and registration links below.

If you are interested in attending just one or all three of the of the presentations, please visit: https://go.ncsu.edu/foragesforhorseowners to register!  If you have any questions related to the series please contact Anthony Growe, Richmond county Livestock agent, at (910) 997-8255.

Posted by Anthony Growe at 4:20 PM No comments:

Purchasing hay to feed is costly so why not protect that investment?  Proper hay storage does come with a price tag but will save you money in the long run.  In this blog post we will explore the two main hay sizes that are fed to horses and the different storage options. 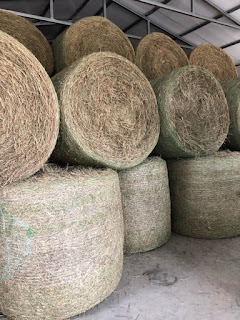 If you are purchasing round bales you have a little more flexibility when it comes to storage options vs. small square bales.  You can store round bales outside, however, you do not want to store them on the ground uncovered if you can avoid it.  Bales stored on the ground can absorb moisture and can have as much as 50% loss.

Best storage practices outside to minimize waste include:

·         Never store round bales directly on the ground.  Pallets work well to keep bales off the ground for optimum air flow.

·         Storing round bales end to end rather than a pyramid if uncovered.

·         Store bales on well-drained sites and never under trees or in low lying areas. 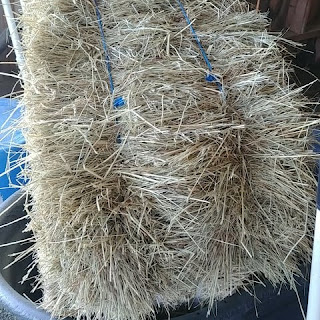 ·        Never store bales directly on the ground, even inside.  Any moisture that comes in can be absorb by the bale.  Pallets works well to keep the bales off of the ground and to allow air flow.

·        Make sure to examine the shelter for roof leaks and rodents/wildlife activity.  Deter rodents/wildlife as much as possible by plugging holes, keeping the area clean, and using traps/baits if necessary.  Some wildlife can cause diseases such as EPM if horses come in contact with their droppings.

·        If you are using a pole shed or three-sided shelter be certain that the weather cannot get to your hay and if it can, you may want to tarp the hay as well.

The main concern with storing any hay is keeping the moisture out.  You have to be careful though not to encourage moisture when storing inside.  Your hay storage area needs to have good ventilation for air flow.

For additional information check out the following websites: https://extension.umn.edu/horse-nutrition/selecting-and-storing-horse-hay and https://site.extension.uga.edu/forageteam/2019/09/hay-storage-options/

Posted by Lauren Langley at 8:21 AM No comments:

What is on your fall and winter preparation list for your horse? Stockpiling hay? Establishing winter forages in your pastures? Getting blankets ready? What about deworming? Just because the temperature starts dropping, does not mean the parasites will drop off as well.

With any deworming treatment, a fecal count needs to be done first to determine parasite load and type of parasite. A fecal count is an estimate of the number of parasite eggs in a horse. Once we know the count and the type of parasite, we can treat it with the most effective dewormer to insure we are reducing the parasite load. The important deworming season in North Carolina is September – April. During the summer months of May – August, parasite egg numbers in pastures are much lower due to the hot summer temperatures and deworming is less of a priority.

Before starting any deworming regiment, consulting with your vet is important. They will recommend the best treatment course that will minimize parasite loads and avoid building a resistance to dewormers. 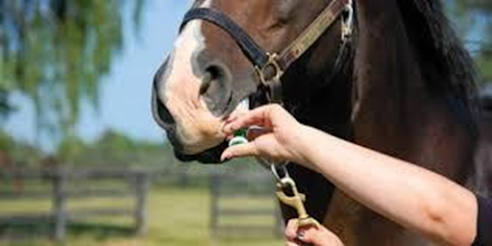 Moderate shedders (200-500 EPG) may need to be dewormed frequently throughout the year. A spring deworming can be done using Ivermectin (Equell®, Zimectrin®, Rotectin®, IverCare, etc), moxidectin (Quest®) or double-dose Fenbendazole for 5 days (Panacur® PowerPak). In late summer, Pyrantel Pamoate (Strongid paste®, TapeCare Plus®, etc), fenbendazole (Panacur®, Safe-Guard®) can be given. In early winter, Ivermectin w/ Praziquantel (Equimax®, Zimectrin Gold®) or Moxidectin with Praziquantel (Quest Plus®) can be administered.

When it comes to pregnant mares and foals that are two months old, consulting with your vet is important for proper care so they can help determine the best treatment plan.

There are other ways to lower parasite loads in horses in combination with deworming. One being rotational grazing. Rotating pastures is not only good for forage regrowth but parasite eggs that are shed in the manure are not ingested as quickly by a host and die out. Cross grazing pastures with ruminants such as cows, goats, and sheep is also effective. Parasites that are common in equine are not found in ruminants and vice-versa. In the summer months spreading or dragging manure is beneficial both for parasite reduction and spreading of nutrients found in manure over the pasture. This also keeps nutrients buildup down in high manure concentrated areas. In winter months the removal of manure is also helpful in decreasing parasite numbers. Doing these things with a parasite control program approved by your vet can keep your horse healthy all year long.

The table below is a chart of active ingredients and the parasites they target.

This blog has covered hay testing and analysis in past posts, but this week I wanted to talk specifically about nitrate toxicity. In my county, and surrounding counties, nitrates have been an issue for the past month. We've had hay samples come back high that normally are not, these growers are used to having safe hay and now must figure out what to do with this hay. Cattle and horses are susceptible to nitrate poisoning and if too high, like in some cases this year, animals will actually die. Ruminants are more susceptible to this problem, due to the way their stomachs work, but if severe enough, horses can suffer as well.

Testing nitrates is a free test from the NCDA & CS lab in Raleigh, so if nothing else, you definitely should test your hay for nitrates. Even if it is not a field where animal waste is applied, fertilizer is applied a some point, the plant goes through drought or stress, so it's important to know what your hay contains. Some nitrate levels are safe for all animals, some should not be fed to pregnant animals, and some levels are too high for any stage of animals to consume. Horses can consume higher levels than those listed and not be affected, make sure you speak to your extension agent or veterinarian on feeding hay that may be considered "high" in nitrates!

Those levels can be seen here:

In terms of symptoms, nitrate toxicity can present itself by diarrhea, colic, weakness, muscle tremors, abnormal gait, blue or brown discoloration of the gums, and in extreme cases, death. Blood in affected animals may be a more chocolate brown than deep red color, due to the activity of nitrates/nitrites on hemoglobin.

Be cautious of what you feed your horses, and when in doubt--test it!

Posted by Stefani Sykes at 8:00 AM No comments:

Temperatures have started dropping and already the bane of all winter pastures in the South is upon us - mud.  Constantly trekking through mud is not only physically exhausting for horses (and us!), but it also can cause several hoof issues - such as thrush and laminitis - as well as injuries to muscles and/or bones.  For the most part, mud is unavoidable.  The soft footing that leads to mud will likely kill any vegetation growing in high traffic areas.  To keep the damage minimal, it is highly recommended to designate a sacrifice pasture.
A sacrifice pasture is a small paddock (a MINIMUM of 200 square feet per horse, but 1,000 square feet per horse is recommended) where horses are confined during winter when the forages are not actively growing and the ground is wet to prevent overgrazing and trampling.  A good sacrifice pasture should be located on higher ground - away from any wetlands or any other area that regularly floods after rain - and should be surrounded by grasses or any other type of vegetation to filter out potential runoff.  To avoid the build-up of manure, and to help control parasites and odors, the sacrifice pasture will need to be cleaned frequently.
Even with frequent cleaning, a sacrifice pasture can become muddy, so good footing material in sacrifice pastures becomes essential.  Below are a few options to consider:

One thing to consider regardless of which footing you choose for your sacrifice pasture, adding a layer of Geotextile Fabric underneath greatly reduces the number of times footing needs to be replaced.
For more information about mud management contact your local Extension Office or check out some of the following articles:

Posted by Kelsey at 1:03 PM No comments:

Following last week's post concerning Equine Metabolic Syndrome, there will be a webinar covering this topic on October 28, 2020 at 7 pm via Zoom.  Dr. Shannon Pratt Phillips, NC State University Equine Specialist will present information about both PPID and IR.  To register, go to  https://go.ncsu.edu/equinemetabolicdisorders Once you have registered, you will receive a Zoom link to the webinar a couple of days before the event. 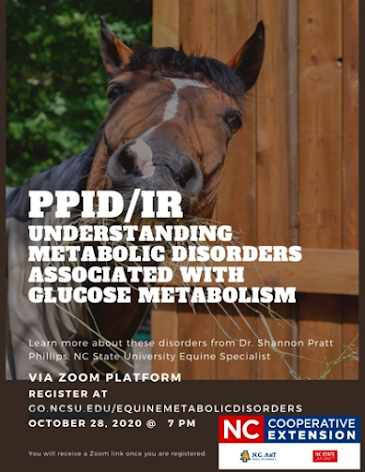 There will also be a webinar related to fire ants.  These critters continue to march across North Carolina and are now in the northern piedmont of the state.  Many people are concerned about these pests and are interested in learning how to control them in both yards and pasture.  Join us on October 15, 2020 at 7 pm via Zoom to gain more information about fire ants.  Dr. Wes Watson, NC State University Veterinary Entomologist will present the information.   Register at https://go.ncsu.edu/personcountyfireants   Once you have registered, you will receive a link to the Zoom webinar a couple of days before the event. 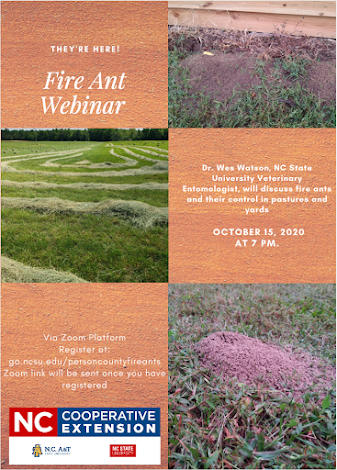 This year, we've had an abundance of rain and grass in many pastures.  Because of this, some horse owners could or may be experiencing overweight horses, and possibly concerns with EMS, or Equine Metabolic Syndrome.  The following MSU Fact Sheet is outstanding at explaining this condition and how it could affect our horses, and tips for how we can manage through this condition. Remember to always consult your veterinarian for diagnosis and treatment of any health condition. 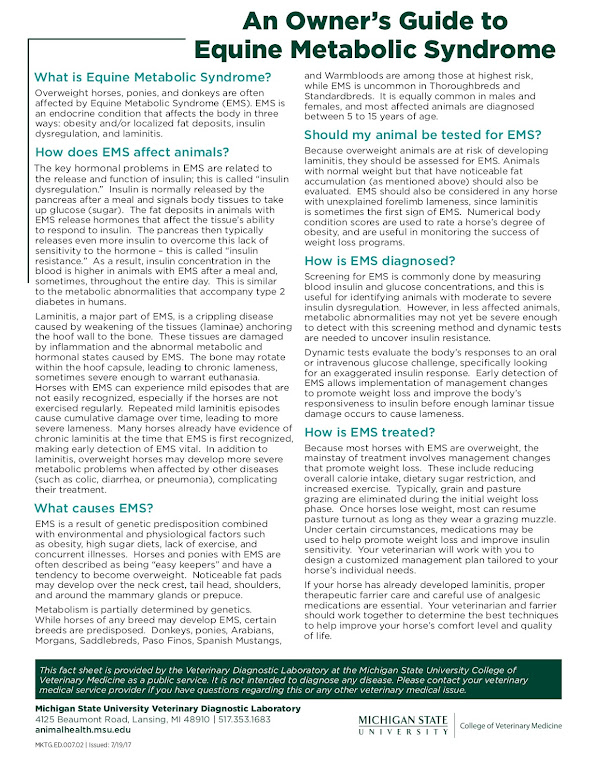 Posted by Eileen Coite, Sampson County Extension Director at 7:00 AM No comments: